What is the difference between bed bug bites and spider bites?

Many people are often bitten but it becomes difficult for them to know whether they were bitten by a bed bug or spider when they wake up.

The bites possess similar characteristics but one has to be keen while looking at them in order to get the right treatment for the bite. 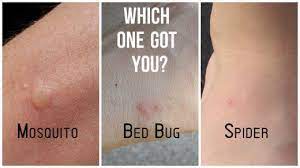 What are Bed Bug Bites?

The bites have mild pain associated with some itchiness. When scratched pus can fill them then blisters can also develop in the area.

They typically bite at night or at that time when you are not seeing them. They have straw-like in which they just suck blood hence the bite mark is normally invisible.

The bites can be found on any part of the body as they do not choose where to bite.  They depend on human blood so they have to bite each and every part they access for them to get their food.

Treatment to the bites can be obtained across the counter. They can be antihistamine cream, herbal skin lotion, and other remedies. The area has to be cleaned before applying the cream for effective results.

What are Spider Bites?

Spider bites are often large as the spider is a big insect. The bite marks are normally left behind. They leave behind two holes as they possess two fangs that they use to bite.

The spider bites can be very dangerous as the spider carries venom. They bite at once and it is for self-defense hence you should be careful when handling spiders.

As the bites are larger and become more swollen, they hurt and this makes the bitten person feel like scratching the area every now and then which makes the bite worse.

Spiders bite any time of the day or night. They do not have a specific time when they have to bite. Their bites appear in groups on the back, torso, arms, and neck.

Their treatment can be obtained across the counter. There are various anti-histamine creams and anti-itching creams. Anti-venom injections may also be required as the spider inject venom when it bites.

Bed bug bites and spider bites both cause itchiness on the skin. One should observe keenly to find which bite specifically is to deal with for him or her to get the correct treatment.

Bed bug bites occur in clusters as they live in groups and each has to bite in order to feed itself. Spider bites occur singly as they only bite once for self-defense.

The main feature that makes bed bug bites appear different from spider bites is the way they appear on the skin.