What is the difference between turkey and chicken?

Turkey and chicken have been liked and eaten by many people because of their delicious meat. They are both classified as poultry. They have many things in common although they are different from each other.

Both are delicious and highly rich in proteins. It can be baked, grilled, or roasted. Both are low in calorie content and fats as compared to beef. They both have lean meat.

You May Also Like: Difference between Lamb and Sheep 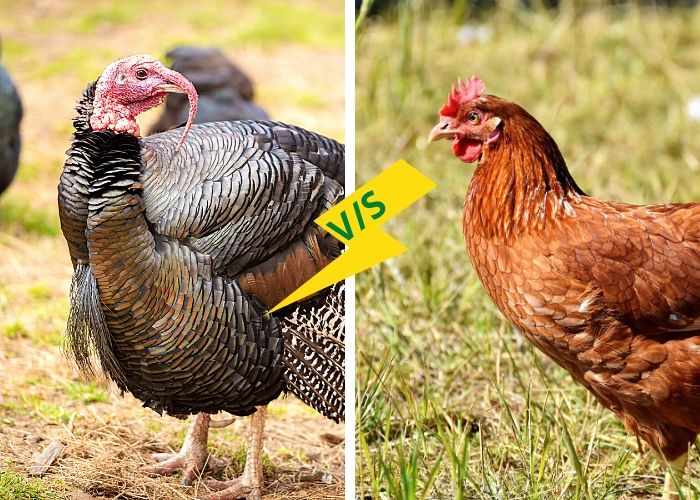 Turkey is a large bird that is native to the Americas. There are two species of turkey. These are wild or domestic turkeys of Eastern and central North America and Ocellated turkeys of the Yucatan Peninsula.

Males have fleshy wattle that hangs from the top of their beaks. There are among the largest birds but the male is larger and more colorful.

They are more aggressive toward humans and pets on the farm. Snoods function both in intersexual and intrasexual selection.

Female turkeys in captivity prefer to mate with males that have long snoods. During mating time, the snoods become redder as it has a lot of blood in it. It also elongates several centimeters.

They are consumed by human beings. Domestic turkeys are preferred as they grow into bigger birds hence a lot of flesh accumulates on its body. Americans eat turkey on special occasions such as thanksgiving occasions or Christmas.

Chicken are birds of which its meat is often eaten by human beings as it is delicious. They are the most common and widespread domestic birds.

Humans keep chickens for their meat and eggs. They are omnivores. They feed on both plant matter and animals. They scratch in the soil for seeds, insects, and other small animals.

Depending on the breed, they can live as long as 10 years. Roosters are differentiated from the hens by their striking plumage of long flowing tails and shiny pointed feathers on their necks and backs.

They live together in broods. Both males and females work together to incubate the eggs and raising of young ones.

It takes 21 days for the eggs to hatch. Before hatching the hen can hear the chicks peeping inside the shells and the hen will cluck to stimulate them to break the shell

They may gang up on weak predators. They may attack it and kill it as it has been reported that a group of hens once killed a fox that had entered its house.

You May Also Like: Difference between Delmonico and Ribeye Steak

Main Differences between Turkey and Chicken

Similarities between Turkey and Chicken

Turkey and chicken are birds that are known worldwide. Most people keep them for their meat. The two are different in that turkeys are large in body size while the chicken is smaller with a frill on top of their heads. The main feature that makes turkey different from chicken is the presence of feathers on chickens’ heads and necks.