What is the difference between puritans and Quakers?

The main difference between puritans and Quakers is that the former believed that followers need to be taught by the church ministers and follow baptism while the latter have their acceptable rules and do not believe in the sacrament.

You May Also Enjoy: Difference between Buddhism and Taoism 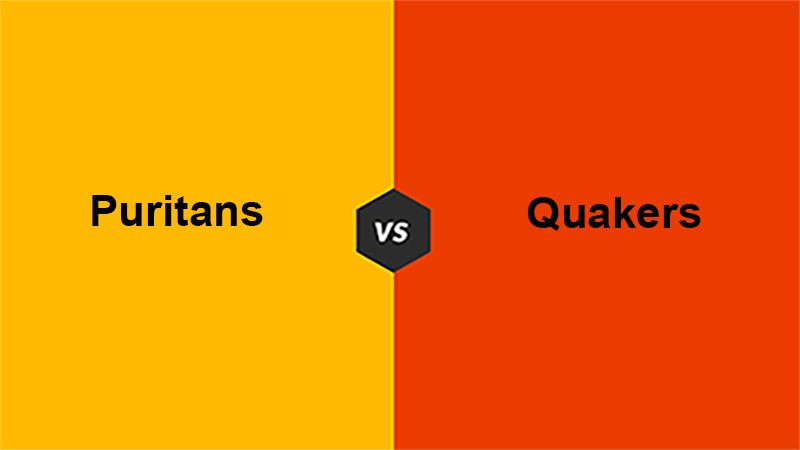 It is a protestant church that was formed in 1630 with the aim of achieving religious freedom. Puritans are believed to have settled in Massachusetts Bay in Boston, England.

The fight for religious freedom come into existence after the arrival of the pilgrims in America. These are individuals who had the same mentality and goal as puritans.

The religion got detached from the Church of England and they believed that everyone in the world was a sinner. But these individuals believed in the following of scriptures of God to receive blessings.

The church also practiced baptisms and this was after receiving teachings from the church ministers. They also believed that each gender plays a specific role and discriminated against the native Americans.

You May Also Like: Difference between Catholic and Christians

It is a faith group that came into existence in the year 1681 and it was started by William Penn who got permission from the English King.

The beliefs of the church happen to be the source of conflict with the church of England. It is something that brought about the separation.

The religious faith considers that everyone is equal and good. The church never encourages violence since they refuse to carry weapons to fight.

Quakers are also known as Friends. The religious faith believes that every problem can be solved in a peaceful manner. Quakers practice religious freedom for their members.

Members have the freedom to believe in what they want and talk to God in their own way. It is the reason behind the huge number of followers in Europe.

Quakers treat people with honesty and upholding women’s rights. The religion also fought for the freedom of Native Americans.

You May Also Like: Difference between Anglican and Catholic

Main Difference between Puritans and Quakers

Similarities between Puritans and Quakers

Puritans and Quakers pave way for the emergence of protestant churches in America and the rise of the world. The religious groups had a common goal when breaking away from the Church of England.

Quakers are honest and peace-loving religion whereas puritans believe that everyone is a sinner and it is only God through salvation that can save them.