When I started teaching microbiology at the University of Mississippi ten years ago, I realized that many students found it hard to distinguish some microscopic organisms.

We did research as a department and came up with teaching techniques that made the work of learners look easier. I came up with a list of differences between various microscopic organisms.

Understanding the difference between bacteria and viruses is crucial in the preparation of a microbiology exam. Continue reading this article for further explanation and differences. 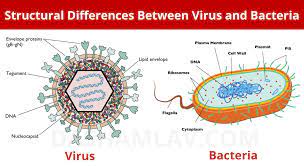 Bacteria are prokaryotes found in the ecosystem. These unicellular organisms can grow in harsh conditions such as hot springs.

Bacteria are classified according to morphological structures. Cocci have a spherical shape, bacilli have rod-shaped, vibrio has comma shape and spirilla has a spiral shape.

Bacteria are surrounded by cell membranes. The cell membrane encloses the cytoplasm that contains nutrients, DNA, proteins, and other essential components.

Bacteria contain non-membrane-bound organelles. Proteins are transported by the cytoskeleton and have circular chromosomes in the nucleoid.

Viruses are non-living things. The genetic material is representing as either DNA or RNA enclosed by the protein core. These viruses infect the life of animals, plants, bacteria, and archaea.

Virion is a complex virus with genetic material covered by capsid. The capsid is a protective protein coat encoded by the viral genome.

Main Differences between Bacteria and Virus

Similarities between Bacteria and Virus

The main difference between bacteria and viruses is that the former is larger and can reproduce independently while the latter is smaller and depend on the host cell for reproduction.